I wish again to convey my sincere condolences to the people of Mpeketoni, Lamu County, over the senseless and brutal killings of many innocent Kenyans and to share with you the grief and sadness over the tragic events that occurred in the county. This occurrence is an unfortunate additional tragedy to the now growing and harrowing statistics of attacks that the Kenyan people have suffered over the last one year. 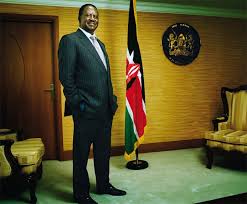 We must stand together as a nation to fight terrorism in all its forms and your Excellency can be assured of my full support in the war against terror. I commend the people of Kenya who have shown unity and resilience and demonstrated courage and patriotism in defence of the motherland.

Last year after the Supreme Court heard and determined my petition challenging the presidential elections, I accepted the verdict. I did that as a true believer in constitutionalism and the rule of law and declared that Kenya is greater than any one of us.

However, since then, Kenya has been faced with major problems and challenges that may tear the country apart if not immediately addressed. I have chosen the path of dialogue as the lawful and sensible way of dealing with what the country faces today.

There are obvious signs that if we do not confront these problems and challenges now through a structured process of national dialogue then the road to peace will be thorny and difficult.

I seek no office or reward. CORD does not want to share power with the Jubilee administration. We have a constitutional mandate as the opposition in parliament and as a coalition of political parties. However, the problems and challenges facing the country cannot all be addressed as an exercise of law making or oversight. Nor can they be resolved on the basis of the classical interplay between the three arms of government.

All sovereign power belongs to the people of Kenya and the people may exercise their sovereign power directly. The national values and principles of governance include participation of the people. We are seeking national dialogue within the context of the Constitution and not outside it.

I therefore urge you, my brother, to read the words of Prophet Isaiah found in Chapter 1, Verse 18 (King James Version);

“Come now, and let us reason together, saith the Lord: though your sins be as scarlet, they shall be as white as snow; though they be red like crimson, they shall be as wool. If ye be willing and obedient, ye shall eat the good of the land. But if ye refuse and rebel, ye shall be devoured with the sword: for the mouth of the LORD hath spoken it”.

These words constituted the political choices that Mahatma Gandhi and Martin Luther King Junior took and which later informed and guided the resolution of the national question in South Africa. So I offer the hand of peace and an olive branch so that we may “dwell in unity, peace and liberty” and in happiness and prosperity.

CORD wishes to put on the table of dialogue five issues, which are; inclusivity and national unity, devolution, corruption, the electoral process and national security.

One of the running themes of the Constitution is the question of unity and inclusivity as a mechanism of slaying the hydra of tribalism, racism and other forms of discrimination. And every state organ and institution is required to be guided by the principles of competitiveness and transparent processes of appointment of state officers and the promotion of gender equality in the management of public affairs. Recruitment in state organs must reflect the diversity of the Kenyan people in equitable proportions. No single community, group or coalition should establish a hegemony over the public service or the distribution of state resources.

These are the standards and the imperatives set by the Constitution of the Republic of Kenya. Less than a year after the last general elections, several communities are feeling excluded on the basis of ethnicity, identity or gender.

One of the objects of devolution is to ensure that there is equitable sharing of national and local resources throughout Kenya. The guarantee for achieving this is found both in Article 203(2) and (3) as read together with Article 229 of the Constitution. In requiring that the Auditor General, the Executive and Parliament conclude financial audit in time, the Constitution protects the counties from the mischief by the National Government of using historical and old audited and approved accounts in the division of revenue. The funds allocated to the counties must be based on the audited accounts of the financial year immediately preceding the current financial year. The county governments have lost nearly 600 billion shillings in 2012/2013 and 2013/2014 because the National Treasury has used outdated accounts for the purposes of sharing of revenue between the national government and the county governments.

The centralism of the old order has been retained by establishing and restructuring the provincial administration in its old tradition and format as a tool of colonialism before 1963 first and later the imperial presidency after independence. The interventions of the National Government through the Ministry of Devolution and Planning and other agencies are suffocating devolution and down grading and undermining the relationship between the two levels of government which otherwise must be conducted on the basis of consultation and cooperation between distinct and inter-dependent entities.

Despite promises made that corruption will be eradicated, the menace has resurrected vigorously and has compromised flagship projects of Vision 2030 and new development initiatives. The unlawful payment of Kshs. 4.5 billion to Anglo-Leasing related companies is shrouded in mystery and raises questions of lack of integrity, transparency and accountability. The Standard Gauge Railway project, which is a key and vital development in the expansion and modernization of Kenya’s infrastructure, has raised serious credibility concerns and it would appear that costs have been escalated in order to accommodate rents and kickbacks for brokers. Major questions are being raised about the probity and accountability of several pork-barrel and ‘sweetheart’ deals in the energy, oil, mining and agricultural sectors. Mega projects have become the handmaiden of grand corruption.

ELECTORAL PROCESS AND THE INDEPENDENT ELECTORAL AND BOUNDARIES COMMISSION

The Kriegler Commission articulated the basis for the reform of the electoral law in Kenya. The problems of 2007 general elections visited 2013 general elections and currently there is no doubt that unless a proper review and overhaul is undertaken, the conduct of free and fair elections will continue to be a mirage in Kenya.

It is not my wish to contest the results of the presidential elections held in 2013. Rather, I want Kenya to develop a political culture based on the proposition that elections should not be remembered through the repulsive images of disputes and even conflicts that arise after every election but rather by the power and might of the ballot exercised and cast in freely contested democratic election.

Under Articles 238 and 239 of the Constitution, the national security organs have important functions of protecting life, freedom and property. They protect Kenya’s territorial integrity and sovereignty against external and internal threats. The security organs need the unequivocal support and cooperation of the people particularly by denying terrorists and criminal elements sanctuary in our land. But we have been hit very hard and complacency and firefighting activities will not rid Kenya of terrorist attacks. People have lost confidence in our national security system and feel disappointed with the incompetent leadership at the head of our security and intelligence organs. Questions are also being raised about our military operation in Somalia not in terms of its validity or legitimacy but in terms of longevity and lack of clear operational objectives. In terms of the confluence and the fast and furious sequence of terrorist activities, 2014 may turn out to be the worst year since the attacks on the American Embassy in 1998 as Kenya lost in two days this week more than 70 people in Mpeketoni. This is besides the shooting, grenade attacks and IED explosions in Diani, the church in Likoni, Pangani Police Station, Mwembe Tayari, the outskirts of the Reef Hotel in Nyali, Thika Road, Nairobi and Gikomba market. And we are still counting. To deal with this sequel of terror and its fatal and devastating effects the nation must sit and dialogue together and in unison combat terror and other invasions to our peace, prosperity and the rule of law.

I want to assure your Excellency that we hold no grudges nor do we want to interfere with your tenure and that of the jubilee administration as the President and the Government of the Republic of Kenya. We have been holding very peaceful rallies as a way, under the Constitution, of engaging the people in an open and public discourse on how we can make Kenya great and prosperous; a free nation, a people liberated and an independent country in the international community of nations.