Here are four of some of our great warriors in building the formidable human rights movement(s) that have pretty much shaped our country in the last three decades.

Here is the story.

On the backs of those four veterans standing there lies the hopes and dreams of our country in the last two generations. It is fantastic to see them still on their feet standing with us on this earth and right inside the jamhuri.

I have had the privilege to work with those guys on different fronts except for Khaminwa whom I just read about.

But we all know that Dr. John Khaminwa is one the best legal minds out there and he has devoted his life and skills to defending victims of state abuse at every stage with no fear at all.

Davinda Lamba on the right has been involved at every stage in our struggle for human rights and democracy in our country.

Davinda had leaned a lot on the availability of basic needs for Kenyans. He is an expert in housing issues and worked a lot with Habitat in Kenya while also travelling out here and pushing us to get Canada involved in helping in the fight for human rights and basic needs in Kenya.

Of course everybody knows about Dr. Willy Mutunga. He has duked it with all of them and took his hits but there is a lot of work Dr. Mutunga has done behind the scenes which are pretty significant.

Today we take the Kenya Human Rights Commission (KHRC) for granted and those who know what that organization has done know we would still be living in the dumps without the actions these organizations have made to move our country forward.

It was KHRC which first lifted the veil on systemic torture of political activists and the extra-judicial murders of Kenyans of all backgrounds. They coordinated their work with Amnesty International which had great influence on human rights issues as things were getting hot in Kenya in the 1990’s.

KHRC didn’t just raise these issues, they fought against them in a total combat kind of fashion. That means you come to battle from all angles and give the enemy no window for escape.

KHRC engaged the dictatorship in direct action with demos to defend human rights.

They engaged the enemy of our rights as citizens of Kenya in the legal front.

In fact at some time they almost had a human rights commando type group to rush into any situation where citizens’ rights were being violated to intervene on the spot and document everything.

It was very effective in preventing and legally fighting against human rights abuses.

KHRC were the first organization to publish complete dossiers on all Kenyan political prisoners in jail and provided direct information on the insanely inhumane conditions under which they were held.

This was a very empowering institution for us and for once we had an organization that talked with us instead of talking for us. And then we talked together to the nation and the powers that be.

The results of KHRC work was enormous. They formed People Against Torture (PAT) which helped so many ex-prisoners document their experiences, publish them and later file cases against the Kenya government for torture and abuse of their basic rights as Kenyan citizens..

PAT was headed by the indomitable Njuguna Mutahi, a guy whom you have to know to figure out how he functioned. Great soldier.

All these time KHRC was also involved to its eyeballs with the broader struggles to condemn the one party dictatorship to its deserved grave.

In fact one of the more prominent faces of KHRC for a long time was the relentless human rights fighter Lynne Muthoni Wanyeki who was the Executive Director of KHRC.

Muthoni and KHRC were also very instrumental in the fights for human rights after the terrible mass murders in the PEV of 2007/8. Without these people, the ICC cases would not even have started.

Even the Kenya National Commission On Human Right(s) KNCHR which should not be confused with KHRC was the product of the work that people like Dr. Mutunga and our folks here in Canada and Maina Kiai in the US. 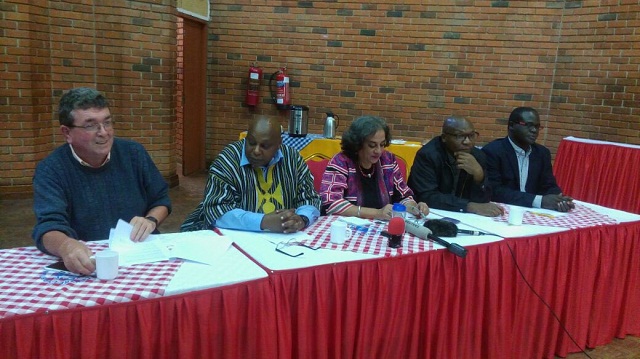 We fought like hell to set up KNCHR which had to be established by an act of parliament and be funded by the government as opposed to KHRC which is a non-profit organization.

Kibaki was a headache at first and Willy was working with some NGO but we pushed it through and the first head of the newly formed institution Maina Kiai hit the road running and never looked back. We know what KNCHR looked and functioned like with Maina Kiai at the top.

Then of course there is also the old soldier Reverend Timothy Njoya there.

The image of the Reverend edged in our collective memory forever was the horrifying image of the old man, white hair and all wriggling in a dusty Freedom Corner in Nairobi covered in blood as some brutal police officers bludgeoned him to near death as they were holding a demonstration against Moi’s abuse of human rights.

He was left for dead on the ground.

This is the brutal attack on Reverend Njoya by Moi death squads:

The News headline says: “Njoya man of God and People makes an exit”

What the headline news is saying is that Reverend Njoya has been murdered in front of everybody by the Moi death squads.

But No papers can’t say that. So they say “Njoya makes an exit”

He is just taking a walk.

Really? But I digress.

These were the days when the current DP William Ruto were running a militia within the police force to protect Moi’s political survival. So this was one of his patented achievements.

Reverend Njoya came to Toronto after that near death experience to for health reasons and later joined the University of Toronto, Munk Institute as a lecturer for a period of time.

One thing Njoya told us which I will never forget when he talked about that beating was that every time they as activists ran out of ideas on what to do next Moi always came to their aid by doing something really stupid and energizing a whole new round of fight.

And that is exactly where we are. We need a new round of energized battle with Uhuru and his circle of headless chicken destroying the country as we speak.

The human right movement as a whole that has been the engine of our national struggle for liberty and dignity as a nation and we have achieved a whole bunch but the struggle is just beginning as always.

Our human rights institutions are dead like a dodo as we speak.

George Kegoro is now the head of the non-profit KHRC. Occasionally they make press statements here and there but it is more like they are just trying to earn their money because they do absolutely nothing else. I don’t even think they are publishing anything now.

I was kind of at a loss trying to navigate the message.

It felt like I stumbled into PhD paper works.

The real shame though is KNCHR which eats our tax money and is supposed to work for human rights and now they are lying in their gravesite only lifting their hands from time to time to collect money as their salaries for doing nothing.

I met Maina Kiai in a conference just when he was working at KNCHR and I asked him how things work there.

He told me it is one thing to talk and fight about human rights when you are fighting in the streets but when you get into that office as a commissioner the first thing you get is a big car and a driver and all of a sudden it is a struggle to see beyond the benefits and prestige of the office to even figure out you are there to fight for human rights.

It is important to remember that. It needs another breed of fighters to stay true to their cause under those circumstances. We can see that now but we are coming at our comrades and they better be awake when we arrive at their doorsteps.

Usually it is unannounced. But we as human rights activists in Kenya have to figure out whether our renounced human rights organizations are moving us forward or backward. May be we match in tendon either way. Who knows.

But we must find out for the good of the country. Soon enough.

2 comments on “Death Of The Human Rights Movement In Kenya”