I have seen this story of Kenya fighting over sea border with Somalia but I really never followed it because I was thinking how in hell do we lose our sea that we have had forever to non-existent dysfunctional government of Mogadishu which doesn’t even control the rest of Somalia.

So I was pretty confident that this was an easy walkover for Jamhuri. I underestimated the incompetency of those who run our country.

Right now it looks I was dead wrong. Somalia took the case to International Criminal Justice Court (ICJ) and the incompetent Kenya AG and his team have been doing nothing. Now when the case comes Kenya is asking for postponement so that they can hire lawyers to represent Jamhuri.

What a bunch of morons we have here. What is our AG’s job and qualifications? Don’t we have people there who can handle a case like this?

When you look at the whole picture, Somalia has a good case and they are very confident the ICJ will rule in their favour. Kenya is terrified after paying very little attention to the matter. Kenya was expecting the African Union to intervene on their behalf the way they did with ICC. Somalia has said no. They want to go to the ICJ.

Here is the really scary thing. If we lose this case as can see in the map below we could very will lose 42% of our sea water surface and access to it.

This could also mean if the maps are designed in such a way that the ships from Europe and the rest of the world have to cross Somalia seawater before entering Kenyan sea water then we are a landlocked country.

So if we lose some or all of the water we have to negotiate on the boundaries of international waters. That we can win and should.

All countries around the world have to fight to define international waters in their water space. Kenya has a good case on that.

Here is the deal. If we declare parts of the Indian Ocean on the Kenyan seafront as international waters we and other countries have access to it.

But Kenya cannot police it unless there are international crimes being committed which Kenya has been asked and tasked by the international community to deal with and stop.

If we lose the whole case, Somalia will have to allow us to use its water for shipping into our seafront if they grant permission and charge us some crazy fee. And poor SGR will be in a landlocked country. Oh dear.

If you think I am joking, look at the map. 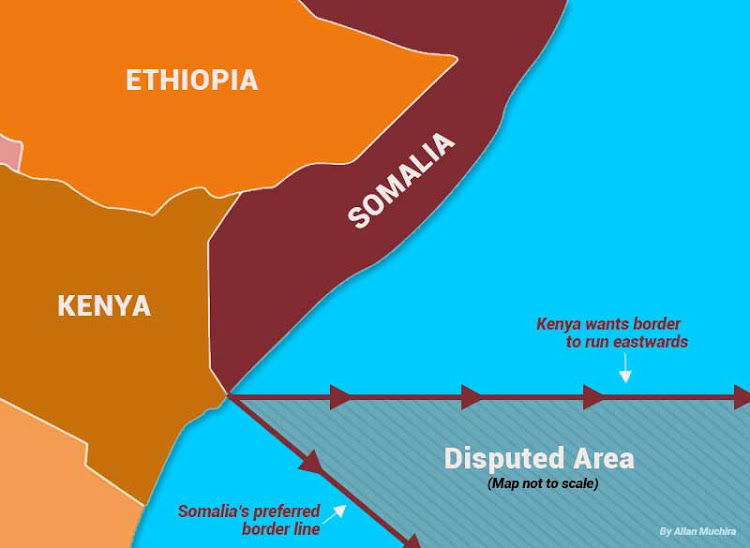 The one thing that people don’t know about Somalia is that it has one of the longest coastline and access to seawater in the world.

Somalia has 3,500 Kilometers of coastline. Give me any country which is even close and tell me what they have done with it.

If people in that country could have figured out what to do, Somalia will today be one of the richest places on earth.

Somalia is capable of building a port system that could serve the whole of Africa and our many international shipping and trade partners in Asia, Europe, the Americas etc.

Look at the stretch of that coastline. For trade it could have been a global magnet. And the amount of fish just lying under that water undisturbed as Somali folks are busy with their stupid piracy business on the sea.

And to think that Somalia is a community of one ethnic group called Somalia but just divided in clans. They all speak one language and have one religion.

And then to let this gem of Africa go to complete waste because of clan politics and now the vice of religious extremism and Al Shabaab is finishing them and they want to grab our sea. Forget it.

Don’t we already have our soldiers in Somali protecting the same government grabbing our country. Tell them you are moving the soldiers from Kismayu to Mogadishu to come sort this matter out then we take it from there.