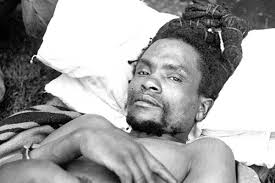 I saw this story and I will follow it up. There is only one Dedan Kimathi Waciuru. He is beyond a legend in the nation. He is our country.

My son was watching some show on Kenya the other day and he told me to come and see Dedan Kimathi alive at his trial. His eyes were moving with that absolute dignified confidence he had, lying down with no shirt and in cuffs so I figured he was a live and he was saying some things.

But Kimathi’s speech at his trial was captured best my Shiraz Durani one of the finest Kenyan librarians and writers.

But I will start here for now. I will get that other piece later.

7 comments on “May Be Dedan The Field Marshal Is With Us In Jamhuri. Oh My!”