Of course I live in Toronto. And Pascal Siakam plays here and they just won a championship for Toronto last year. We are the reigning champions of the NBA.

But now we have the NBA All Stars coming for 2020. In the East where I live the top three players are all Africans.

Pascal Siakam (Toronto Raptors), Joel Embiid (Sixers), Giannis Antetokounmpo (Ateto as we call him in Afrika, from the Bucks, the best team in the NBA at this time and Ateto the best player right now). That is beautiful. Isn’t it?

This is Ateto. The most feared player in the NBA today. Nobody knows what to do with him. Neither do I.

And then this. Victor Oladipo from Indiana Pacers. He is an all star but he was injured. Now he is kicking in there. And we are just starting.

I am not even talking about Bismack Biyombo yet. Imagine this Afrikan NBA challenge.

The Toronto Raptors centre — and soon-to-be unrestricted free agent — paired up with NBA legend Steve Nash for the annual “Showdown in Chinatown” soccer game, which benefits the Steve Nash Foundation. He even busted out a sweet celebration routine.

I am not finished yet but the trend is obvious.

Here is Victor Oladipo coming back. Make no mistake about it. Ola is going to be best point guard in the NBA.

1Eight times over the past two months, Victor Oladipo has been assigned to the Fort Wayne Mad Ants. It’s there, with the Pacers’ G League affiliate, that he’s ramped up his activity level on the court,

Joel Embiid reacts to he and Pascal Siakam as All-Stars, plans to play

Philadelphia 76ers big man Joel Embiid has been sidelined since January 4 with a torn radial collateral ligament in his left hand, but that did not stop him from being voted in as an All-Star starter on Thursday. He is the first Sixer since Allen Iverson to be named an All-Star for three straight seasons so it’s a pretty big deal.

“It was great,” said Embiid when he saw his name called. “Third time in a row. A lot of us don’t get that opportunity, so I was happy. I was excited.”

Another big deal is the fact that Toronto Raptors forward Pascal Siakam will be joining him in the starting lineup. Embiid and Siakam are both from the country of Cameroon so this is a pretty big deal for the Sixers big man.

“I was more excited about Pascal,” he added. “Two guys from Cameroon, we barely started playing basketball about nine years ago so to see us, especially as starters, it means a lot. I’m proud to be from Cameroon and from Africa and be representing.”

As mentioned above, Embiid has not played in a game since January 4. He did return to practice on Friday in hopes of returning shortly and since the game is on February 16 in Chicago, he plans to play in the All-Star game as well.

“Yeah, I’m doing the progress necessary,” he said. “I feel great. My finger feels good so I’m not too concerned about what the All-Star game is going to look like. Right now, we are 6th in the East so hopefully, by next week I am able to play.”

Embiid will miss Saturday’s big matchup with LeBron James and the Los Angeles Lakers, but he will be reassessed on Monday in hopes of returning soon. After the Lakers, the Sixers host the Golden State Warriors and then head out on the road to face the Atlanta Hawks to begin a four-game road trip

And don’t get me started with Serge Ibaka a champion in Toronto Raptors right now.

1Early in his career, Serge Ibaka made his name as one of the most fearsome rim protectors. When he was in his athletic prime in Oklahoma City, he led the league in blocks and was a general terror in the game.

And before that we have folks like Hakeem in this game. We have been here for long.

And Masai Ujiri in the house.

Of course nobody forgets

Tallest dude ever in the NBA.

Manute Bol: Basketball player who used his fame to help peace efforts in his native Sudan

At nearly 7ft 7in tall, Manute Bol, who has died of kidney failure aged 47, stood out even among the giants of America’s National Basketball

Of course all basketball is black but I don’t want to go there. There is Larry Bird remember that.

But here is the young man.

The rookie grabbed 17 of his 22 points in the fourth quarter.

And today we lost one of the best basketball players and humans the world has known.

5:55 PM PT — TMZ Sports has obtained some of the last photos taken of Kobe Bryant with his daughter, Gianna, and it’s clear they both had basketball on the brain in one of their final moments together. 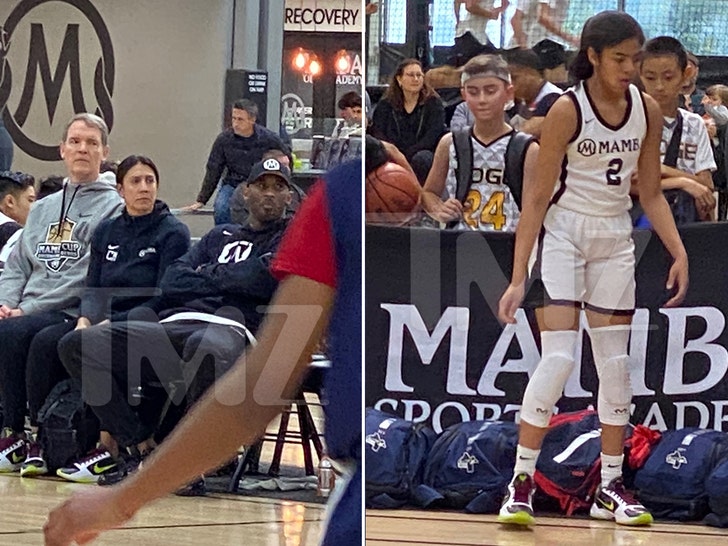 The pics were shot Saturday at Kobe’s Mamba Sports Academy in Thousand Oaks, where Gigi’s Mamba team played two 8th grade girls games that day. You can see KB watching carefully from the sideline as Gianna was on the court. 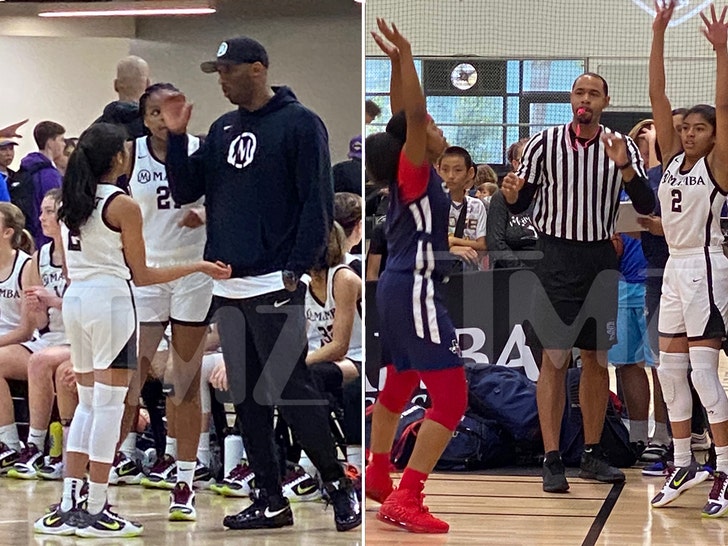 At one point, Kobe was seen giving his kid some tips. It’s unclear if he’s the head coach of her current squad or not, but he was definitely in coaching mode from what we can tell. We know he’s coached other teams she was on in the past. Kobe said Gianna had aspirations to be in the WNBA, and by all accounts … she was well on her way to getting there.

One thing that’s pretty obvious from this snapshot moment is that they were both fierce competitors and loved the game they played.

4:56 PM PT — The Mayor of Costa Mesa, Katrina Foley, just confirmed the identity of one of the other victims in the helicopter crash … girls basketball coach Christina Mauser, who’s married to Tijuana Dogs singer Matt Mauser. Matt also confirmed the news himself.

On Facebook, he wrote … “My kids and I are devastated. We lost our beautiful wife and mom today in a helicopter crash. Please respect our privacy. Thank you for all the well wishes they mean so much.”

4:30 PM PT — L.A. weather was extremely foggy Sunday morning, and law enforcement sources tell us even LAPD air support was grounded because of it. Flight tracker data shows Kobe’s chopper appeared to first encounter weather issues as it was above the L.A. Zoo. It circled that area at least 6 times at a very low altitude — around 875 feet — perhaps waiting for the fog to clear. 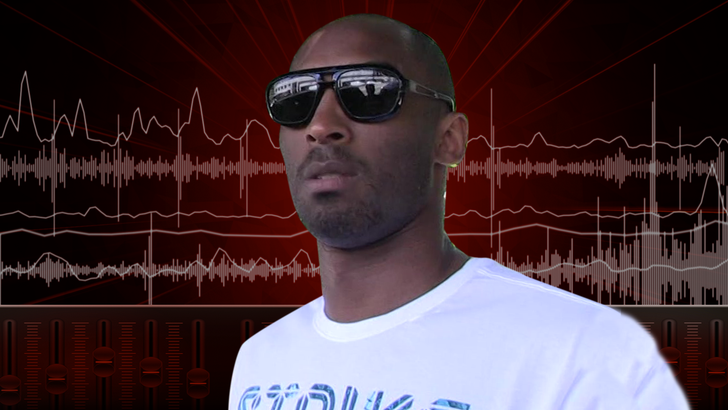 We know the pilot contacted the control tower at Burbank Airport around 9:30 AM PT, and the tower was aware the pilot had been circling for about 15 minutes. The pilot eventually headed north along the 118 freeway before turning to the west, and started following above the 101 freeway around Woodland Hills, CA.

At around 9:40 AM they encounter more weather — as in seriously heavy fog — and the chopper turned south. This was critical, because they turned toward a mountainous area. The pilot suddenly and rapidly climbed from about 1200 feet up to 2000 feet.

However, moments later — around 9:45 AM — they flew into a mountain at 1700 feet. Flight tracker data shows they were flying at about 161 knots.

3:49 PM PT — Michael Jordan has spoken on Kobe’s death, saying … “I am in shock over the tragic news of Kobe’s and Gianna’s passing. Words can’t describe the pain I’m feeling. I loved Kobe — he was like a little brother to me. We used to talk often, and I will miss those conversations very much.”

He adds, “He was a fierce competitor, one of the greats of the game and a creative force. Kobe was also an amazing dad who loved his family deeply — and took great pride in his daughter’s love for the game of basketball. Yvette joins me in sending my deepest condolences to Vanessa, the Lakers organization and basketball fans around the world.”

3:01 PM PT — The players, coaches and families at the Mamba Academy were obviously emotional when they heard the news about Kobe’s death … but came together for a moment of silence and prayer.